There is extreme heat spreading through southern California and south as far as Texas. Potential for record breaking heat in many counties, raising 10-20 degrees throughout the weekend and the beginning of the week. The heat should die down a little bit towards the end of the week. Everyone should be careful and keep an eye on the temperature, also make sure you keep hydrated! The heat should die down 5-10 degrees within the next week.

Appliance companies recommend that you result to little electricity use as possible, to refrain from a power outage. Keeping your thermostats to 78 degrees or higher and to turn off all unnecessary lights you might have on in your 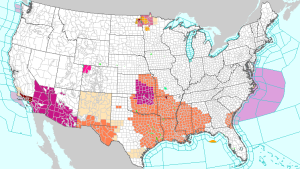 home. Along with the peak of the heat, try to avoid using any major appliances after 9 pm.

Ways to Beat the Heat

During the summer it’s the time to take off those pool covers and find your swimsuits because with the heat out there you gotta stay cool: and what’s cooler than going into your backyard and swimming. You can host little get together among your friends and have a pool party, play a ton of pool games and even have a bbq. It’s the best being able to go out and swim in your own pool.

If you don’t own a pool, there are other ways to have fun in the sun. Local community pools are always an idea, take your kids out and go to your neighborhoods water park, although nothing beats having your own pool to swim in.